A Wax-Resist, Indigo Hemp Cloth: A Tradition in Laos

When I first spotted Ms. Mai Suxiong, the oldest practicing Blue Hmong batik artist in Luang Prabang, Laos, she was dressed in a simple sarong and carried a roll of handwoven hemp cloth. She gently stepped down the stone-covered path toward a covered hut along the Mekong River, ready to begin her day of creating intricate patterns, made of beeswax, on this handspun cloth. 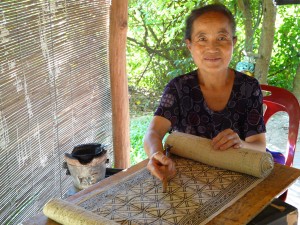 Ms. Suxiong stops midstream in her application of wax onto handwoven hemp. Note the application tool (tjantung) in her hand.

Ms. Suxiong had learned the making of this wax-resist and indigo-dyed hemp cloth when young, when its primary use was for pleated skirts and baby carriers. This batik practice is old and traditional to the Blue Hmong hill tribe of the northern province of Laos. During the weeklong Hmong New Year, which takes place in mid-December, it is still customary to make and wear a new ornate skirt fashioned from this cloth in order to showcase the batik, embroidery, and applique skills of its maker. A traditional skirt is made from three horizontal cloth panels—one of which is the batik one—with the skirt-making process taking many months for completion. (Of course, the time can be cut short by purchasing the batik-decorated skirt length from a regional artisan. A skilled artist was an economic asset to a family, being able to command a high price for her work.)

Hmong pleated skirts. The wide panel is a batik indigo over which is appliqued (front and back skirt). The middle skirt’s bottom panel is batik.

Making the Cloth
Before 1950, hemp was a cultivated crop on most farms in Laos, each family growing enough for their own cloth. Today, northeastern Laos is the primary area where hemp is grown. The process of hemp cultivation to the weaving of the cloth was done by hand: growing the hemp, peeling the bark away from the stalks to release the fiber, gathering the fiber into bundles and twisting the ends together to form a continuous thread, sun-bleaching the fiber and spinning it, and weaving it into a finished cloth. All of this was done before the wax application and dyeing.

Strands of hemp are twisted together to weave fabric. Photo credit: Jo Smith.

Handwoven hemp cloth used as the base for batik.

Patterns
The wax-resist patterns used were drawn from memory, learned over time from mother to daughter, or within a family group. Individual motifs reflected the village and farm life of the Hmong—symbols of shells, flowers, coins, cat paws, seeds, and mountains. When combined on cloth, they would tell an ancestral story perhaps not even known by the artisan. Some cloth is covered with motifs, while others left with blank spaces to be filled in later with (sewn) applique and embroidery in contrasting colors. A skilled artisan, such as Ms. Suxiong, possesses intense concentration and an incredibly steady hand to draw the freeform patterns, even during the intense heat of the day. She draws with a tool made of wood with a small copper receptacle at the end which holds the hot, melted wax. The wax flows through a small nib. An artisan has a number of these tools, the nibs of various sizes in order to draw different weights of lines.

Large design blocks are drawn and then filled in with more detailed patterns. The lines are wax resist.

Indigo Dyeing
Dyeing the waxed cloth indigo blue can be as time-consuming as waxing the fabric itself. A key note in the indigo dyeing process is that the water is almost cold so when the beeswax-laden cloth is immersed in the bath, the wax doesn’t dissolve. The fabric is dipped, lifted, and re-dipped many times until all the light areas are gone and the fabric appears entirely dark. Then the cloth is dipped into a vat of hot water thus removing the wax. The batik artist may re-dip the cloth in the indigo bath one more time to change the white-ish lines left from the waxed pattern to a pale blue pattern. From here, these lengths are looped between the drying lines and left in the sun for five to ten days, fixing the dye so it doesn’t fade.

After the fabric is indigo-dyed, it’s looped over poles to dry in the sun, and to ensure colorfastness.

Modern Day
The weavers at Ock Pop Tok make fabric of handwoven hemp which is used for pillows and panels, small bags, or insets into table and bed linens. The hemp is locally cultivated and is widely regarded as the crop of the future because it has such a low environmental impact. It can be grown and processed without any chemical treatments and yields three times more raw fiber as cotton. These products are a mix of cultural tradition and modern day use.

The entrance to Ock Pop Tok is welcoming.

If you want to see the ornate dress with pleated skirts and take part in a many-day festival, make plans to attend the Lao New Year in December. But you don’t even have to go all the way to Laos as there are Hmong communities throughout the U.S., and they continue to celebrate their traditions and cultural dress today. If you do go to Luang Prabang, visit Ock Pop Tok and take a Hmong batik class.

By supporting these artisans, you help sustain these rich traditions. Share on.