Learning bandhani, the Indian name for a resist-dyeing “tie-and-dye” technique, at the feet of one’s elders is the traditional way. It’s what imbeds deep cultural meaning and a connection to cloth, permeating the tactile senses beyond spoken words, and contributes to artisan mastery. 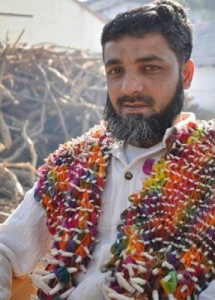 Aziz Khatri wearing a multi-colored, in-progress bandhani. The patterns are wound tightly with thread before dyeing.

Steps to Mastering Bandhani
It is the way Abdul Aziz Khatri of Kutch, India, mastered the art of woolen bandhani from his family. His grandmother’s and mother’s skilled hands taught him the fine tying and binding of traditional patterns. (His mother was honored with the prestigious President’s National Award for craftsmanship in 1993–the first artist in India to receive the award for bandhani work on wool.) From his father he learned the technical art of dyeing. But Aziz’s passion for learning continued beyond his family.

In 1998, he received a scholarship from the All India Handicrafts Board to study natural dyeing. In 2003, entirely on his own initiative and savings, he undertook training at the Ahmedabad Textile Industries Research Association where he learned about water treatment, water conservation, environmental concerns and applications for all types of dyes. His studies continued in 2005-06, graduating with design training from Kala Raksha Vidhyalaya (KRV). Aziz says of this, “My experience at KRV gave me the skill of keen observation and confidence. I have the advantage of being both an artisan and a designer. I can do what others cannot!” Judy Frater, the former Founder Director of KRV knew Aziz since he was young, as well as his father who was an advisor to KRV. It was with Judy’s assistance, as the Founder Director of Somaiya Kala Vidya, that Aziz applied for the international Folk Art Market in Santa Fe this past year and was accepted.

Innovating on Traditional Bandhani
In bandhani, dot patterns are stenciled on a fine cloth, each pattern dot wound with a continuous thread forming a knot. The knots protect the fabric from being colored during the dye process. Once the cloth is dyed and dried, the knotting is removed by pulling on both ends of the cloth causing the thread to pop off.

Aziz uses traditional designs of chandrokhani, a stylization of classic moon of the Khatri women which focuses on curves, an essential in traditional patterns; shikari, meaning coin; and ferak, a diamond pattern used in dyed woolen ludi, a veil traditionally worn by Rabari camel herders.

A sample of stenciled pattern on cloth.

Aziz’s traditional collection based on designs of chandrokhani, shikari, and ferak.

His new designs are inspired by nature and the world calling his collections, Monsoons and Galaxies, and uses the bharti technique, the most skilled type of bandhani because the tyer doesn’t follow a pattern but fills in the spaces freeform between motifs.

Aziz Khatri’s dyeing and bandhani skills are in great demand among designers, NGOs, and international companies, some having met him at the large handcraft exhibit in Delhi. He remarked, “In just one trip to Delhi, I learned so much! I have learned the importance of exposure and English language.”

Expanding Resist-Dyeing
Lately, Aziz has been innovating on the traditional classics of bandhani and has been designing stitched, as well as folded and clamped “shibori”, a Japanese term for these techniques. He has created complex patterns by folding and clamping the cloth multiple times and dyeing it in successive dye baths. He’s also taken to handpainting some of his cloth before starting the resist patterning, adding another layer of color interest.

A folded resist and clamped pattern. Note the creases where the fabric was folded and clamped.

A one-color example of mokume, a wood-grain shibori pattern created by a stitched resist.

A few years ago, he said, “My dream is to go abroad for a year, to learn design, international culture and English fully.” He has started this journey by coming to the U.S. this year. Let’s help him continue in his dream. Shop his new collection in the ClothRoads store.

Thanks to Judy Frater for providing some images and information about Aziz Khatri.