There’s sensuousness to reading a cloth, taking one’s fingers and lightly passing over the surface, like braille. To me, Indian bandhani is the braille of all artisan-made cloth resists. Simply stated, bandhani is one form of tie-dyed cloth. It’s a technique of creating patterns on cloth by resisting parts of the fabric by tying small, continuous knots in it before it’s dyed. The areas where the knots are tied don’t allow the dye to penetrate, leaving these areas the color of the original cloth. 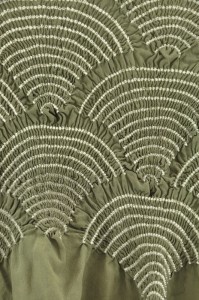 Detail of the shell pattern made with very small bandhani dots.

During our visit to Bhuj in the Gujarat region of India last December, we reconnected with the artisan Abduljabbar Mahmadhushen Khatri aka  Jabbar Khatri. Having met Jabbar at the Santa Fe Folk Art Market previously, it was a unique pleasure to be in his studio and see the bandhani process from beginning to end. 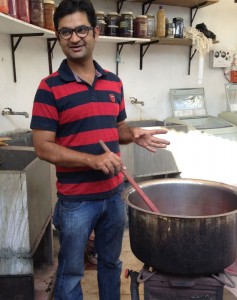 Jabbar Khatri stirring the bandhani scarf in the dye bath.

The Making of Bandhani

The process starts by drawing a design on stencil paper that is then punched with needles. A fugitive dye is then brushed through the paper, imprinting the design directly on the fabric. 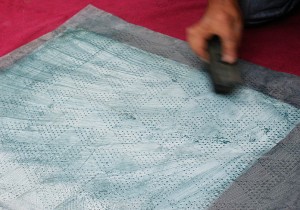 A fugitive dye is brushed through the stencil paper. 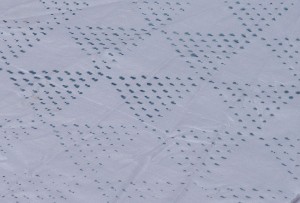 The pattern is stencilled onto cloth.

The base fabric can be fine silk or cotton, or even wool. A fine silk cloth can be folded in two for a symmetrical design or to make two scarves, thereby saving time. The tying of the pattern with thread to form the resist is next. This step is generally women’s work as it’s portable; men do the dyeing. Most widely used is the simple dot (bindi) which is formed by pinching a small area of cloth and tightly wrapping cotton in one continuous connect-the-dots around the raised parts. Using a metal tube through which the cotton thread is fed facilitates the winding around the dots. Once the wrapping is complete, the fabric goes into the dye bath, the dye squished into the fabric to make sure it penetrates. The binding resists the dye from reaching that part of the cloth so when the thread is removed, the undyed circle is revealed. 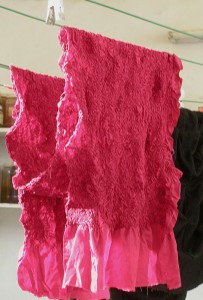 The “tie-dyed” fabric after it has been dyed, still tied and drying on line.

Once the scarf is dyed and dried, the knotting is removed simply by pulling on both ends of the cloth. Watch this whole process in this video (length 2:16).

This Shell Scarf was made following all the traditional steps. The base fabric is fine silk; the natural dyes used are a combination of weld and logwood. (And for all who know me, this color of green ranks high on my clothing-coordination list.) The ends are finished with a fine-rolled hem. 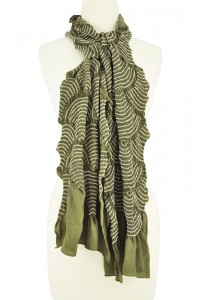 This silk scarf is made using the bandhani (tie-dye) resist pattern and then naturally-dyed. 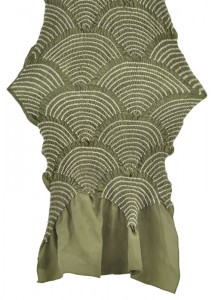 The shell pattern with the top part stretched out.

You can see the fineness of the tying, how close each small bindi pattern is next to each other. I’ve stretched the scarf so you can see the pattern and how the shell or fan shape scrunches the fabric while still keeping it prominent.