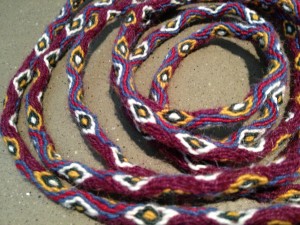 My fingers became all thumbs. I’d get in a rhythm that would last a few passes, and then I’d lose my cross. Since I spoke a little Spanish, it was assumed a Spanish-speaking instructor would suffice. Heck, I thought so too. I mean, just how hard can it be to make a tubular cord? Heck, I’ve done intricate braiding before. But I was quickly reminded, this wasn’t braiding, it’s weaving.  And it’s not just any weaving but ñawi awapa (eye border), the crossed-warp tubular edging that’s applied to most of the Peruvian Chinchero textiles. 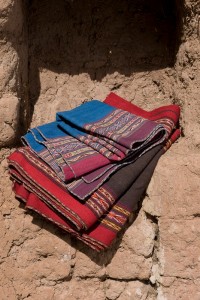 I was lashed to an in-progress cord by a hook in the wall at the Center for Traditional Textiles in Cusco, Peru. Concentration was required as my fingers crisscrossed the threads, the weft always passing through the warp in one direction creating  the tube. Every so often I looked up from my cord and asked, “Bueno?” and my teacher would nod her head or look at my ñawi awapa, cross a few threads and get me back on track. Three hours later, I fumbled through enough that I could make the cord.

A few years later, I took the workshop again–same location but with partial English instruction. Clearly, this technique had not entered my muscle memory. But at least this time, I walked away with a neatly made cord and many notes should I attempt it again.

Opportunity presented itself. This past weekend, Nilda Callañaupa, with assistance from Antonia Rojo, was teaching ñawi awapa in conjunction with the opening of the Weaving Lives exhibit at the Avenir Museum, Colorado State University, Fort Collins. I had falsely assumed that most Peruvian Highland weavers knew this technique. But Antonia is from the Pitumarca community, and while she weaves the most intricate scaffold, or discontinuous warp, weaving, ñawi awapa was new to her. So I watched Nilda teach her; Antonia picked it up in minutes. 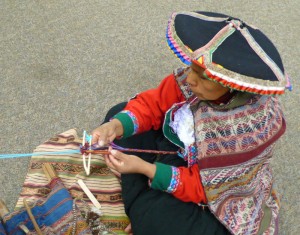 After watching her, I went home, clamped my ñawi awapa loom to one end of the table and lashed the other end to my waist.  This was now my third time and I was charmed.

Here you can see what the loom consists of– a forked stick to keep the warp threads in order. Some form of batten to beat the weft tightly (a tongue depressor works). The warp is then tied to the body and tensioned at the other end to something stable. 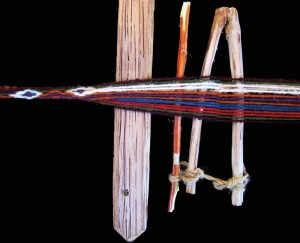 But here’s the trick, this edging is mostly made to finish and decorate the border of the textiles. The Peruvian weavers attach it to the textile  as they weave the textile  and make the ñawi awapa edging all at the same time. I’m daunted. 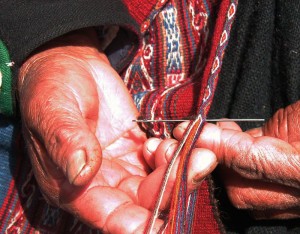 So if you want ñawi awapa in your future, you can buy these amazing  textiles in our shop. Your next chance to learn ñawi awapa is this coming November at the Tinkuy, a gathering of weavers in Cusco. Very soon we will be sharing all the details for participating in this global textile adventure.