Fine Handknitting in the Peruvian Highlands

“Are you sure you want to learn? Do you think you have the patience? People of your age are not interested in traditional things like knitting a chullo (hat).” 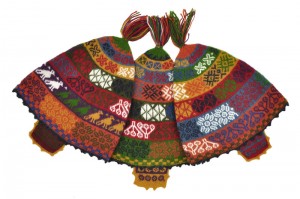 Knitted chullos from Pitumarca are knitted of alpaca, 12 stitches per inch, with colorful patterns and stripe-and-check border similar to Chinchero.

These questions were asked to a young Nilda Callañaupa by Mrs. Roberta Sallo Qusipe, a Chinchero elder. Nilda did return the next day, and after many hours of knitting observation and conversation, she was instructed to bring her yarn and knitting needles to knit. And she remembers: “She started to teach me the first scallop-shaped rows of the border called k’utu-pikascha, and she told me to keep practicing until I learned it. I returned constantly and asked her to teach me the next steps and every time I was criticized for my mistakes. She emphasized that stitches had to be very tight, that knitting was very enjoyable, but also time consuming. That is how I learned, not only how to knit, but also a lot about life in Chinchero. I also learned that you need to have patience for knitting, as well as for other things.” 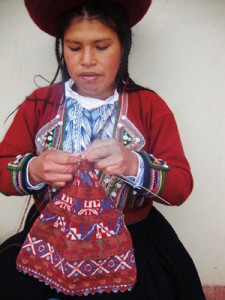 Yasmina Panihuara of Chinchero knits a traditional-style chullo. The cola (tail) is being formed.

What once was a declining tradition, has now fully recovered. Even the children are practicing the easier knitting techniques and memorizing the patterns.  (To learn more about Chinchero’s rich heritage, read Textile Traditions of Chinchero: A Living Heritage available here.)

The Parts of the Chullo

The chullo has many parts, some of which are the same in other communities, but the Chinchero-style is certainly identifiable. It starts with the picas or punas, the very complex technique that forms the scallop-shaped edge. This edge begins with a chain made of three colors, picking up two other colors, and increasing and decreasing the stitches in turn. (When I first tried to learn this edge, it took me hours just to figure out the Andean style of holding the needles, yarn, and knitting backwards. To see children, women, and men whipping through these patterns while they chat further instills my respect of their talents and ingenuity.) 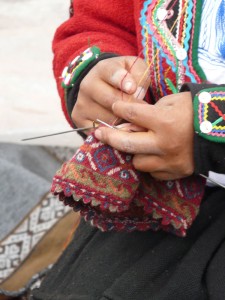 Notice the scallop, stripe, and check border on this Chinchero-style knitted hat.

After the edging, the straight edge of the hat begins with a stripe and check border design called ñaccha (comb) or k’utu (bump). Next step is the head shaping, ridden with designs influenced from animals (such as fox, goose, hummingbird, and pigeon) and agricultural references (furrows, plants, ropes, etc.) Then the cola or tail, the narrow part of the chullo where animals are knit upside-down, is knit. The top of the hat is knit into three tubular sections, ending in three tassels. Fringe is added to the tail as well and narrow woven bands are sewn on the base to tie the hat to the head. The very last step is knitting the orejas, the ear flaps.

Chullos are worn by men and boys as well as babies, and frequently worn perched on top of the head versus pulled snugly around the ears. Ear flaps or woven bands with beads may be attached at both sides of the hat. Beads may also be incorporated as decorative elements. 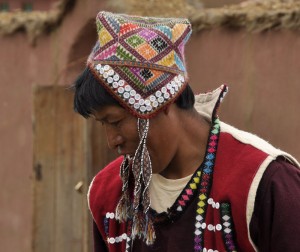 Men knit their own chullos in the Chahuaytire community. Knitted earflaps are added as are buttons and woven braids for further adornment.

Men predominately design and knit the chullos in Chahuaytire. In Accha Alta, both men and women knit the “bobble” style hat—the grutas, strings of lumps or bobbles, are made separately and then knitted into the hat to create geometric patterns. 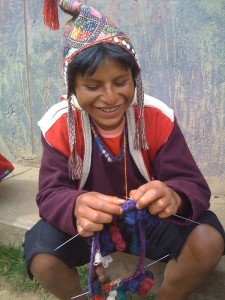 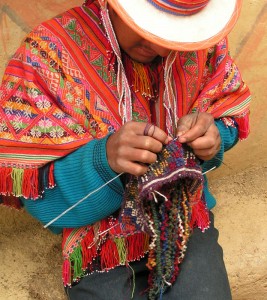 The bobble-style hat being knit by a man in Accha Alta.

Patterns aren’t recorded but passed down or shared within a family or community. Graphs may be created but many times designs are created as they knit. Motif patterns and colors signify regional identity and sometimes marital status.

For us, especially in the cold weather, we don these knitted jewels to wear as crowns upon our heads. 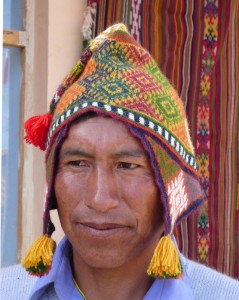 —-Nilda Callañaupa learned her knitting and so much more from her Elders. She is the founder and director of the Center for Traditional Textiles of Cusco. She is co-curator the exhibit Weaving Lives: Transforming Textile Traditions in the Peruvian Highlands opening this Thursday at the Avenir Museum of Colorado State University. The show runs through August 2, 2013. Nilda is teaching a workshop this Saturday on the Chinchero style of chullo knitting.

And if you can’t knit one you can buy a handknitted peruvian hat from CTTC at ClothRoads.