The many styles of buttons

In 1997, Amina Yabis was a mother of four young boys married to a schoolteacher, Si Mohammed, whose income was steady yet meager. The family lived in a three-room mud brick house in Sefrou, a small town near Fez in Morocco. That year, Amina decided to break out of the narrow role that Moroccan society had defined for her. She knew that women needed to have access to the cash economy and the economic life of their community to participate in public life outside of the home; she also knew that most of the women in the province earned money by making hand-knotted buttons used for traditional clothing throughout Morocco. Early Jewish residents of Sefrou had introduced this craft but merchants controlled the trade, keeping most of the profits from the labor of the housebound Muslim women.

Amina began to organize women in her community so that they could take control of their product. With the help of the U.S. Peace Corps, To further the development of women’s role in public life, she established Golden Buttons in 1999 with the help of the United States Peace Corps and more than 400 charter members from throughout the province. Under Amina’s leadership, the association developed a literacy campaign, initially teaching 180 girls and young women to read and write standard Arabic. In 2000, Amina founded the Sefrou Women’s Silk Button Cooperative, called Cherries. As the association’s financial arm, the Cherries co-op bought buttons from members and marketed them throughout the country, eventually supporting and improving the lives of several thousand women and girls. For her commitment and vision, Amina was nominated in 2005 for a Khamissa award as a pillar of Moroccan culture.

Another style of button

The Cherries cooperative continued to expand its scope, adding additional textile crafts and representing the women of Sefrou beyond Morocco. In 2009, Amina and her husband traveled to the Santa Fe International Folk Art Market for the first time, bringing the beautiful buttons of Morocco to textile fans in the West. In 2011, these beautiful handmade buttons became one of ClothRoad’s charter products. 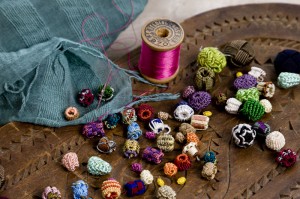 Thanks to Gregg Johnson for providing the information and images about Amina Yabis and the Cooperatives. Gregg is a weaver as well as a retired Peace Corp volunteer. It was during his second tour of service when he was sent to Morocco; here he met Amina and worked with her and the Sefrou Women’s Button Cooperative. Although he’s been back in the U.S. for five years, he continues to help them connect with new markets. Also, thanks to Elaine Lipson, for her fine editing of Gregg’s words. Elaine is the founder of Slow Cloth, as well as an artist, editor and writer.