This is a story of transformation that began before the earth shook Nepal twice in a few weeks, when women artisans were transforming scraps of saris, silk, and wool through a hand, wet-felting process into fashionable, felted art-to-wear scarves for the U.S.-based company, The Red Sari. It’s a story of what women can co-create when a vision is shared, changing lives of isolation and financial insecurity to ones of enhanced self-worth, status, and independence.

Taking a Leap
Sometimes it’s best not knowing something. This is how Julie West felt when leaving a career in healthcare to pursue graduate school at the University of Arkansas, Clinton School of Public Service. It was while working on an international public service project in Nepal, when she became inspired by the country and its artisans.

Julie remembers, “I returned to Nepal after graduation for a four-month stay, working side-by-side with the women artisans in the Kathmandu Valley. It was through a collaborative process of testing, failing, and testing again that we designed our signature product, the felted vintage sari scarf. After that, we continued to collaborate on many other products.  In the fall of 2009, I launched The Red Sari.” Prior to working with Julie, this artisan group of fifty women did outsource work for many people so they’re thrilled to be working with only her, being paid a fair trade, living wage.

Laying out wool fibers over the sari fabric before the felting begins.

All products go through a quality check during various stages of making.

Julie digs through piles of damaged sarees selecting colorways for the scarves.

Returning to Nepal at least annually, Julie works directly with the women on product development. When she’s not there, she’ll send photos or sketches and the women will riff off of them or come up with designs on their own. Making felted scarves is a time-consuming process of bonding fabric with fiber, one which requires hand scrubbing, rubbing, and rinsing layers of materials with hot, soapy water until disparate elements transform into one colorfully rich scarf.  The use of repurposed old saris is really important for the environment as well as using natural material. And while some products veer away from the old saris, the artisanry and uniqueness of the products make a fashionable statement.

The crinkle scarf is another new upcycled sari collaborative project.

A new product for the season–ruffled scarves.

Why Red
In the Nepalese culture, the color red is both auspicious as well as a symbol of transformation. It’s a color in constant view of daily life. From the painting of household portals to applying a tika (a red dot) to a married woman’s forehead, red conveys protection, purity, dignity, and honor. For women, the wearing of red begins at marriage, an outward symbol conveying their cherished status, and ceases upon the death of a husband, no longer cherished but abandoned to the restrictive life of widowhood. 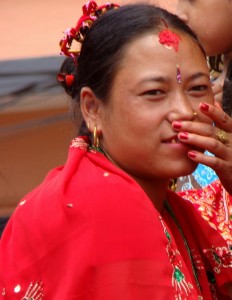 Widows are many, having lost husbands during the ten-year civil war which ended in 2006. And now, with lucrative industries beckoning able-bodied men elsewhere, both widowed and married women are carrying on the work of family and community. Constitutional changes are beginning to address long-needed provisions for widows.

Shortly before the first earthquake, Julie was working on a humanitarian project of establishing a short-term living and training center for women in transition. The center would offer basic education in reading and math, to teaching skills such as machine sewing and hand embroidery. The training would prepare them for living on their own. This project is now on hold due to the earthquakes.

Triaging From a Distance
The felting group couldn’t be reached for three days after the first earthquake. Julie’s on-the-ground coordinator, Bishnu, skypes with her regularly and she finally heard from him, learning that her group was fine, although some of their village housing wasn’t.

Julie said, “We had just gotten the factory back into full production and felt like we were doing really well until the second earthquake hit. The factory was hit this time–the pillars cracked and the aftershocks will continue. The factory is shuttered until engineers can assess the safety.  This work is the only livelihood for over 50 women and families.  The rebuilding and recovery phase is long. Everyone is looking for space, and the monsoon season is coming soon.” But Bishnu assures her that temporary space is being set up and things will move forward. Julie says a common saying is, “Don’t quit us. We’ll figure this out.” Her response is, “Why would I quit? This is a partnership and we’ll work together to figure it out.”

This is the wet-felting area. The concrete pillars in the background are now cracked and unstable.

These pillars cracked from the earthquake making unsafe working conditions.

What You Can Do
Can you help rebuild The Red Sari factory and help fund the costs of lost wages for the women and their families and the price tag associated with relocation? The link to The Red Sari’s crowdfunding campaign is www.gofundme.com/theredsari. No donation is too small. It all adds up.

Thanks to Julie West for providing information and images for this blog. But most of all, for her efforts to not quit. Pass it on.