Home Page › Asia › How in the World, Brocade Weaving

How in the World, Brocade Weaving

Have you ever really looked at the motifs woven into your scarf, shawl, or fabric and tried to figure out how in the world the weaver made that pattern in the cloth? Okay, maybe you haven’t. But I have because I’m intrigued by seemingly simple cloth that has patterns created by hand manipulation, not by the loom. So today’s look is at some brocading done in Guatemala, India, and Laos.

Brocade, Inlay or Supplementary Weft
Is there a difference between brocade, inlay, and supplementary weft? Brocading can be done in the warp, weft, or both. It can be continuous, going from selvedge to selvedge or from one end of the warp to the other, or it can be discontinuous, which is called inlay or inlaid weave. To make an inlay pattern, you use an additional, or supplementary, weft. Confused? 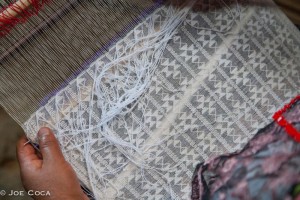 Brocade being woven on backstrap loom in Guatemala.

Let’s look at the cloth on this backstrap loom being woven by a weaver of the Ixbalem Ke cooperative in Guatemala. The warp threads are the vertical ones, the weft thread horizontal and it’s here you can learn some simple terms and techniques. There are multiple wefts—one which goes from selvedge to selvedge creating the base plain-weave cloth, the others are additional (or supplementary) wefts. The star pattern motifs are formed by an inlay brocading technique called picb’il, and use the supplementary wefts. The brocade is discontinuous, meaning the motifs are placed, by hand, only in certain areas and lay on top of the plain weave. Each motif is formed using thread three times the weight of the ground cloth–this is what makes the pattern more pronounced. This pattern repeats multiple times across the weft.

In this next example, there is both continuous brocade forming the zigzag pattern and a discontinuous one for the duck pattern.

Ducks and flowers are brocade woven in the center of each diamond.

A Specialty of the Kutch in India
Here’s another example from India. The specialty of the Kutch weaving tradition is the hand insertion of ornamental supplementary wefts. It looks almost like embroidery. Dayalal Kudecha is a designer and weaver from Bhujodi, a weaving village near the district capital Bhuj and this is a detail from one of his shawls. In looking at this image, you can see small star patterns using black thread with a diamond pattern in the center. The diamond is created in the same way of inlaying the thread while weaving but the black thread is tripled making the pattern more pronounced.

The Intricacy of Laos Silk Brocade
And finally there’s Laos and the weavers have taken brocading to a whole new level. The designs they create in silk are complex and extraordinarily detailed. In its most basic form as shown in the prayer flag on the left, the single-color bird motif is intricately woven; the bird character representing good omens and ensures success. The multi-colored diamond motif that is used in the center of the pouch (bottom left) has so many diamonds, that each small one had to be inlaid into the base cloth while the larger diamonds were being created too–so many short bobbins of color to keep track of. Taken to the next level, on the right is a detail from a silk shawl which has wide bands of brocading at both ends. The motifs change throughout the bands, each telling a story in its own right. Mind boggling to me.

A bird motif brocade woven into a prayer flag.

I may make a weaver of you yet. At the very least, you’re now an informed shopper and can impress your friends with your textile knowledge. So the next time you’re buying a fabulous silk shawl from Laos or a soft cotton gauze scarf from Guatemala, you’ll know that the weaver inserted each one of those threads by hand forming each pattern and created a little message or story while doing so.

Help us elevate and sustain the artisans and their textile heritage traditions. Share this on.