Home Page › Dyeing › Indigo: The Color Which Will Change Your World

Indigo: The Color Which Will Change Your World

Is there another dye that holds such deep, almost magical, powers as indigo? One that is called by so many names, such as ai (Japan), landian (China), chàm (Laos and Vietnam), nila ( India), gara (Africa), or añil (Central America)? One that beckons the spirits or causes mutinies?

A fermenting indigo dyepot with its trademark scum.

Last week, I had the good fortune to meet Catherine Legrand, the author of the book, Indigo: The Color that Changed the World. She curated “A Week of Indigo” exhibit at the Santa Fe Weaving Gallery including pieces from these aforementioned countries—old, revered pieces to functional, vintage linen aprons, napkins and monogrammed nightdresses. Every piece was evocative whether in its simplicity or its deep traditional roots. 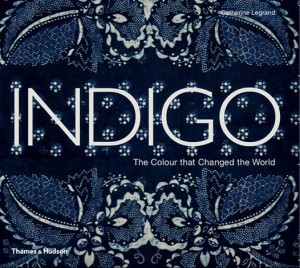 This lush book by Catherine Legrand with over 500 examples of indigo textiles is captivating and informative.

It was a year ago that I reviewed Ms. Legrand’s book for Spin-Off magazine and I couldn’t let it out of my hands. This lush coffee-table book is loaded with over 500 exquisite examples of indigo textiles. The travelogues of the countries visited, in pursuit of indigo, are rich with images and stories of ceremonial, religious and spiritual significance. The artisans and dye masters portrayed open up their homes and dye studios to explain their lineage, talk of their process of working with indigo (being careful not to divulge their trade secrets), and show off the various types of fabrics they create. While it doesn’t have step-by-step, how-to images, if you’ve done any indigo dyeing and have knowledge of resist techniques, you’ll gain plenty of ideas and knowledge to experiment with dyeing processes.

The indigo celebration continued with a lecture at the Wheelwright and the screening of the film “Blue Alchemy” by Mary Lance. Indigo comes alive in this documentary film and no matter how many times I’ve watched it, I learn more about the dye that has captured the human imagination for millennia, and about the remarkable people who are reviving indigo to improve their lives, preserve cultural integrity, and bring beauty to the world. Get your own personal copy here.

If these two inspiring works haven’t possessed you to click and order, perhaps there’s an indigo textile that has your name on it? We’re happy to indulge your indigo yearning in the ClothRoads shop. The other day, a friend commented, “Wow, indigo has really taken hold as the color this year. What do you think is next after indigo?” My response, “Does there have to be anything?”