Making is Making a Comeback

I’ve had some time this summer to think about making. Usually too busy with “work” projects (AKA paying gigs), I’ve actually had some down time, which thankfully has coincided with some glorious old-fashioned Garden State spring and summer weather. During my respite, in addition to a return to gardening and enjoying the company of family and friends, I took advantage of this time to do some making. Nothing worthy of Instagram, but enough to start me thinking about why I abandoned my roots as a maker for so long. 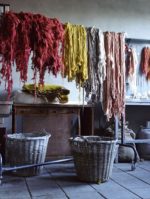 Hand-dyes: the subtle tones of naturally dyed yarns and fabrics are part of the fashion world’s response to too much high tech.

Some drawing, some knitting, some crochet, even some hand stitching, have given me a enough of a taste of the making life to realize that my soul is inviting me to integrate making back into my everyday routine. I’m not going so far as to commit to a #yearofmaking, but I’m “making” a personal pledge to spend more time doing the creative work that brings such satisfaction.

What suddenly brought me to this point after many years? Yes, it could be a way to attempt to retreat from the constant onslaught of disturbing news that this summer has delivered. Or perhaps it was because the season began for me with two days of textile immersion starting with the Talking Textiles seminar at Parsons School of Design and a members’ preview of the incredible Manus X Machina exhibition at the Met Museum. Interestingly, though probably not coincidentally, both events focused on making, specifically hand versus machine and both were textile-centric.

Inspiration and the State of the Textile Union
Li Edlekoort, the organizer of Talking Textiles, is founder of the trend-forecasting service Trendtablet and the Dean of Hybrid Studies at Parsons. In person, Edekoort emanates an earthy confidence. That day, dressed as she usually is in loose clothing that matches her black and white hair, the only color was a strong red lip. It’s difficult to pinpoint her accent – she is Dutch, but has lived in Paris, South Africa and New York. With images from multiple sources including her lush magazine Bloom, her presentations are visually captivating and intellectually stimulating. She opened this day with a talk and slide show, declaring, “Making is making a comeback”.

Li Edelkoort, as usual comfortably dressed in black and white, is one of the world’s most sought-after trend forecasters.

Sheep shape: Edelkoort predicts handknits and rugged wools will be in style. We knew that!

The themes of this year’s presentation, a hybrid of trend report, pure inspiration and state of the textile union, ranged from Carpenters Guild (worker wear – indigo, denim and brown overalls) and Shepherd’s Flock (yarn, wool, homespun cloth) to Clinical Trials (high tech fabrics, sleek lines) and Mechanics’ Union (metallics, hybrid evening and day fabrics). With an emphasis on craft, hand stitching, embellishment and details, the importance of Making was the underlying message of her presentation.

Always in style: Once again, indigo fabrics are part of the fashion landscape.

American Textile Mills
The next speaker, photographer Christopher Payne, is thinking about Making in a different way. He became fascinated with textile mills when he stumbled upon Bartlett Yarns in Harmony, Maine. Bartlett is this country’s  oldest operating mulespun woolen mill. It reminded him of the state hospital workshops he had photographed for his book, Asylum. “While those places had long been abandoned, this mill was fully operational, a scene from the past miraculously coexisting with the present.”

Payne has been documenting American textile mills ever since, and shared images of his project, which includes Woolrich in Woolrich, Pennsylvania and the New England Shirt Company in Fall River, Massachusetts, and shared his thoughts on the importance of mills and the textile tradition in this country.

While most of us who are involved in textiles in some way are well aware of how fabric is made and where it comes from, Payne pointed out that, “In this era of service jobs and office work, many of us have never been inside a factory. Several decades of overseas competition, unequal trade policies, and a flood of cheap imports have decimated American factories. Since 1990, job losses in apparel and textiles have been greater than those in any other type of manufacturing, and today we have little idea where, or how, the shirts on our backs are made.” Or who is Making them. It is Payne’s hope that his mill documentation project will bring about more awareness of America’s textile tradition and its rebirth.

In a related talk, Jacob Long, the CEO of American Woolen Company, explained how his company is actually a part of this rebirth, and the need in this country to refocus on the art and the craft of manufacturing.

The American Woolen Company was America’s leading producer of worsted and woolen cloth at the beginning of the 20th century with 58 textile mills throughout New England and over 40,000 employees. It’s now located in Stafford Springs, Connecticut, in the former Warren Mills complex, which it purchased in 2014 from Italian luxury group Loro Piana, who had owned and operated the mill for 26 years. The acquisition was made with the intent to “reintroduce luxury worsted and woolen textile manufacturing to the United States.”

A bolt of suiting fabric is draped on a vintage table at the American Woolens mill in Stafford, Connecticut.

Having a mill within driving distance of New York City, allows for greater interaction with designers, who can actually watch their fabrics being woven — getting closer to the Making. American Woolens is focusing on more rugged suiting fabrics, using 2-ply woolen-spun yarns as opposed to finer-gauge European fabrics, which tend to be made with single-ply worsted yarns. He compares his company’s business model to the craft beer business: artisanal, small batch, and priced accordingly.

Other speakers included Inka Apter from Eileen Fisher, who spoke about her company’s goal of using 100% sustainable fabrics by the year 2020. She included this jarring statistic: The average US consumer discards 70 pounds of clothing per year! Are you weighing what you take to Goodwill?

Manus X Machina: Fashion in an Age of Technology
Li Edelkoort closed the day’s program with a teaser from the Met Costume show, Manus X Machina, which had an annual star-studded gala two nights earlier. Luckily, I already had my ticket to go to the show the next day.

The Met costume exhibits are always inspirational – remember Alexander McQueen Savage Beauty? And the remarkable China: Through the Looking Glass? I’ve been to many of them, but this show is definitely a must-see for anyone with the remotest interest in Making, and probably my favorite one yet. Not only are the pieces on display incredible, the installation itself is uplifting. It’s not like those other shows that were in the former basement home of the Costume Institute. While always unforgettable, those shows felt dark and oppressive in that setting. This installation is in the new Anna Wintour Costume Center, named of course for the notorious editor of Vogue magazine and editorial director of Conde Nast, which is in an above-ground gallery, and has a cathedral-like feeling of space and lightness. In fact the entire exhibit is like a cathedral to clothing. The haunting ethereal music that fills the space adds to the effect, but the installation itself is done in a way that leaves the viewer in awe. Well, it did this one anyway!

The central garment is a Karl Lagerfeld 2014 couture wedding dress, created for the House of Chanel -replete with a 20-foot embellished train –and according to Costume Institute director and the curator of the show, was an inspiration and a case study around which the entire exhibit is built. The design of the train on this “superlative example of [the] confluence between the handmade and the machine made,” Bolton explained, was sketched by hand, manipulated on a computer, painted by hand, machine-printed with rhinestones and hand embroidered with pearls and gemstones.

Issey Miyake’s Flying Saucer dress from 1994 is one of the few brightly colored pieces in the Met show. The dress, made of a series of wired fabric circles, collapses like an accordion, for easy storage!

The Met’s website describes the show like this:
“With more than 170 ensembles dating from the early 20th century to the present, the exhibition addresses the founding of the haute couture in the 19th century, when the sewing machine was invented, and the emergence of a distinction between the hand (manus) and the machine (machina) at the onset of mass production. It explores this ongoing dichotomy, in which hand and machine are presented as discordant tools in the creative process, and questions the relationship and distinction between haute couture and ready-to-wear.”

The exhibition is divided into themes, based on the métiers or techniques of 18th century dressmaking in France, as outlined by Denis Diderot, a French Enlightenment philosopher, who wrote a book entitled Encyclopedia, The Arts, Sciences and Crafts. This volume served as Bolton’s inspiration for the show and facsimile pages of the book are displayed on the walls surrounding the central display. Numerous exquisite examples from all of the major couture houses and designers represent each theme, which include artificial flowers, featherwork, lace, embroidery and cutwork. They are shown in groups that are thematically and visually related in a way that makes viewing the show a pleasurable experience in spite of its vastness. The palette of most of the show is muted – whites, creams, pastels (with a few pops of color) – which adds to that sense of lightness. That feeling that you are in a cathedral stays with you in spite of the crowds.

Even though there are numerous examples of high-tech (machina) in the show, what stays in my mind a month later and what keeps me thinking about making, is all of the incredible handwork (manus). The show is open until Labor Day, and a must-see if you are in New York City.

Guest contributor Karin Strom has been collecting textiles since she was a child. (Seriously, what kid asks her Dad to bring back fabrics from his business trips?) She has worked in the hand knitting yarn industry for many years and in publishing. She is currently working as a consultant and can be reached at yarnstrom@gmail.com