If you would like to consider our products for review please contact info@clothroads.com. We will get back to you promptly. 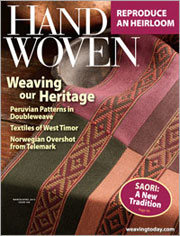 On the Cloth Road with Marilyn Murphy

“Sometimes, an art form becomes a mission. An inescapable one.”

A Review of Kid Mohair from Tajikistan, A ClothRoads exclusive  “In the United States, the yarn is distributed by a relatively new company called ClothRoads. You’ll want to remember that name, because the company was founded by several of the early Interweave Press executives. They know fiber and textiles, they’ve traveled extensively, and they’ve got big plans.”

A Bid for the Future: An Auction to Benefit the Center for Traditional Textiles of Cusco

A Year Ago in Morocco

No Tourists = No Textile Sales, Support the Weavers of the Center for Traditional Textiles of Cusco