Meet the Makers of the Traditional Oaxacan Hand Spindle 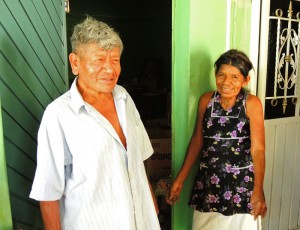 Last month, ClothRoads traveled the Oaxacan coast of Mexico on an off-the-beaten-path fiber tour with Eric Mindling of Traditions Mexico. We did indeed escape the arctic blasts at home and welcomed the warm Pacific Ocean waters. But better yet, we met Mixtec hand spindle makers, and weavers who cultivate brown cotton, clean it, beat it, spin it, and weave it—and we picked and spun along with them. We road high into the hills of the Amuzgo villages in the state of Guerrero to meet the makers of some of the finest textiles, spun from organic cotton and backstrap woven into intricate brocade work. And we ended our weeklong journey along the rocky ocean coastline, spending a day with one of the few remaining Mixtec Murex purpurea shell dyers. Over the next weeks, I’ll share these highlights and more. So come along with us as we travel the cloth road. 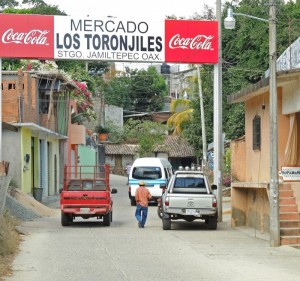 Stop One
After driving 2 ½ hours northwest of Puerto Escondido, along a somewhat winding road, we entered the small town of Jamiltepec. One of the first-day highlights was stopping at a local mercado where a “middle woman” sold traditional hand spindles used for spinning brown cotton.  Although we each bought a spindle from her, we were interested in locating the source, the maker. For years, Eric had heard stories of a one-legged man who lived up a hill, who made them. He was also told there was another maker down the road by a school. So off we drove, stopping every so often asking locals for more directions.

Meeting the Hand Spindle Makers
Sure enough, we found a small house of an elderly couple, Antonio and Maria, who still make the malacate, the traditional support spindles. A little leery of us at first, only Antonio spoke. But we pressed with more questions and they quickly learned we were spinners and interested in the whole show. With this, they opened up and began. 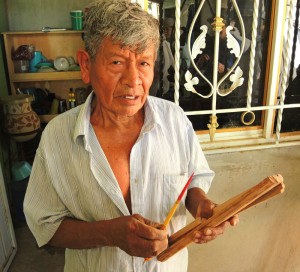 The hand spindle and its sources–the mangrove wood and Antonio.

This town has always been known as the hand spindle making town, but now there are just three people who make them—Antonio, Maria’s brother (who is the one-legged man and Antonio gets the wood for him), and another man who no longer lives close to town. Maria chimed in, telling us she descends from a family of potters. 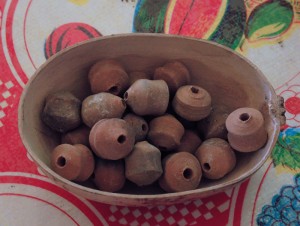 Maria makes all the whorls from clay.

She makes the “fruit” aka whorl out of clay; she is also the artist and paints the spindles in the traditional colors from long ago–predominantly yellow with red-and-green stripes. The colors of the spindles are all the same, but the arrangement of colors and the widths of stripes vary. We were told that these colors are “what’s expected–that other colors wouldn’t sell.” 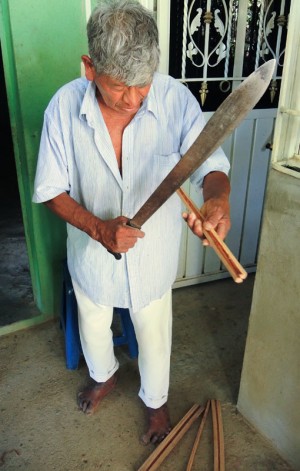 The machete is used through the entire hand spindle making process.

Antonio makes the shaft from the mangrove root, an extremely hard wood. In May, during the dry season, he goes to the mangrove forests, located on the coast. Searching through the mangroves, he looks for roots that grow straight–it’s the upper part of the root that’s used for the shaft. Using a machete, he cuts off about an arm’s length of the root. (The machete is used for the entire spindle shaping.) Back home, he removes the bark and carves the wood. Since his primary livelihood is farming, and spindle making is labor intensive, he only carves the spindles when he has time.

Their Market
The hand spindles they make are used for cotton spinning—although silk could be spun on them.  They’re sold at the local markets and at the Easter fair in town, a once-a-year point of trade where “outside” merchants sell raw supplies, such as thread, yarn, etc. But now, the Easter fair isn’t as critical as there are more ways to get raw materials. And, before we appeared on their doorstep, they certainly hadn’t sold to a bunch of gringas before. We did indeed part with many hand spindles, and we happily left them with enough pesos to sustain them for many months. You can own one too from the ClothRoads store. 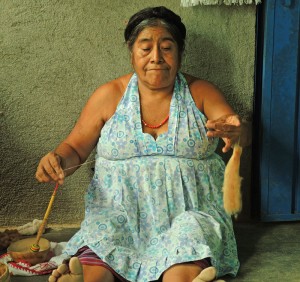 Here’s a teaser for next week: Our next itinerary stop, the Two Sisters. Here’s a pic of the talkative sister, Feliza, happily spinning away using the traditional hand spindle.