Men at Work: Knitting and Weaving in Peru 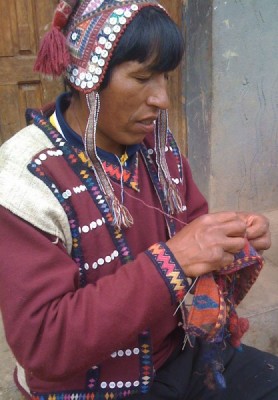 It’s impressive watching the skillful hands of the Peruvian Highland men as they knit away on colorful hats, working the bicycle-spoke-sized knitting needles, tossing colored yarns to and fro, and nary a written pattern in sight. Or weaving the finely patterned cloth stretched out on a backstrap loom, their fingers quickly picking patterns, and beating each weft in place. Not that it should be any more impressive watching the male artisans of the Center for Traditional Textiles of Cusco (CTTC) make exquisite textiles than the women. It’s just that, here in the U.S., men aren’t a very significant percentage of textile artisans, so it delights me to see these men keeping their rich textile traditions alive.

Knitting
Knitting was introduced to the Andes by the Spanish in the 16th century. While innovations have prevailed over time, the use of colorful and intricate motifs continues. The men from the CTTC villages of Accha Alta, Chahuaytire, and Sallac knit traditional hats called chullos. They are responsible for making their own as well as their son’s and/or godson’s. Chullos are worn by men and boys, as well as babies, and frequently worn perched on top of the head versus pulled snugly around the ears. Ear flaps or woven bands with beads may be attached at both sides of the hat. The Accha Alta community is well known for the knitting hats decorated with textural popcorns (qurpu).

The men from Sallac knitting traditional hats. Note that they are also wearing knitted vests.

The boys learn to knit the traditional hats at a young age.

Weaving
In the 1980s, the men in Pitumarca resumed weaving an ancient tapestry, tapiz, technique practiced by many cultures in Peru dating back to pre-Incan times. This style of tapestry includes motifs of animals, birds, plants, and other symbols important to the narrative of the piece. This village also weaves discontinuous warp textiles.
The Chahuaytire men are known for weaving colorful graphic patterns used in mantas, ponchos, and runners. It was potato harvesting time the last time we visited, and they were quite willing to stop their weaving and proudly show off the varieties of the Peruvian potatoes.

The men in Chahuaytire weaving on backstrap looms at their weaving center.

The woven manta comes in handy at potato harvest time.

Braiding and More
At the Tinkuy weaving gathering last November, I watched expert Señor Caylloma making his special dance sling braids. His slings are still made from llama fiber, just as the ancient Andean ones were made during Incan times. Besides ceremonial or dance slings, these simple ones are used to control animals as well as to secure their bundles onto the backs of llamas.
And who couldn’t be struck looking at the weavers of Santa Tomás (Chumbivilcas) in full caballero dress also at Tinkuy. While I didn’t see them weaving, they certainly don their handwoven scarves just right.

Traditional sling-braid maker from Arequipa, Peru, forming a multi-stranded braid in his hands.

The caballeros from Santa Tomas community wearing their handwoven scarves.