Home Page › Peru › On the Cloth Road in Peru: A Wedding in Chinchero

On the Cloth Road in Peru: A Wedding in Chinchero 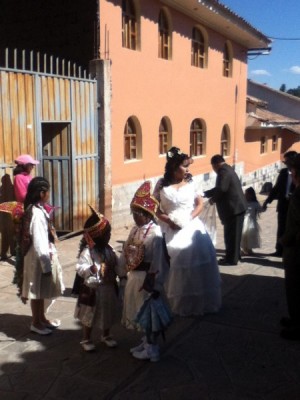 My second weekend in Peru held a surprise and delight –I had the honor of attending a Peruvian wedding, which coincided with the traditional celebration, Santa Rosa de Lima, in the town of Chinchero. The bride and groom, Lydia and Jorge, decided to marry on  this holiday after being asked to host the annual dance and dinner associated with it. Generally, it seems that marriage in Peru is not a huge focus for couples relative to the American ideal. The idea of combining celebrations is common, and these two events compliment each other. And because Lydia is Nilda’s sister, I was invited to attend the combined events.

I introduced you to Nilda and how we met in my post last week. During the opening of the Weaving Lives exhibit this past January, Nilda spoke about the culture of her people and villages–how textiles play an important part in Peruvian celebrations, traditions, and their spirit. She captured her audience with images featuring mountain landscapes and festivities. During her talk, I felt very connected with the stories, having been raised with many similar values, and knew I would come here to immerse myself in both the culture and textiles. And now, I’m here at a wedding. 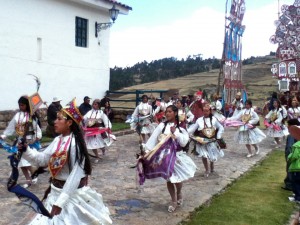 Dancers leading the way down from the chapel to the town hall.

The celebration started with a procession. We all took our places lining up along the sides of the street. In the center of the street, a group of dancers and a marching band lined up in front of the bride and her father. The dancers were mostly female and wore white dresses, dazzling hearts, and crowns.  A few men, dressed in animal costumes, joined them. Once the party was ready, the band started and the dancers led the way. We all followed, walking or dancing, while being serenaded up the cobblestone streets. First stop was the church, located at the top of the town on historic ruins, where everyone piled in to watch the first of two weddings conducted by the priest.  After this, the procession reformed and we made our way to the town hall where Lydia and Jorge were married by  the magistrate. Finally, we partied are way back to town, and the reception and dinner began. 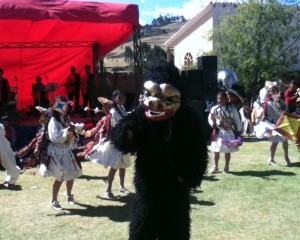 The reception was a celebration welcoming all from their community. Traditional meals and drinks were served. Most interesting, was a fermented drink called chicha. I later learned that it has been prepared and consumed in communities throughout the Andes for millennia.  And then the dancing began to the music of two live bands. I love to dance as much as they do–it’s one language we could all speak.  Everyone danced, young and old alike. A couple’s dance would turn into a line dance by the grab of your hand.

Towards the end of the evening, beautifully handwoven textiles of Chinchero were presented to the bride and groom. They put them on and continued to celebrate. Adorned in these fine textiles,  they finished the night surrounded by the love and weaving traditions of their community. 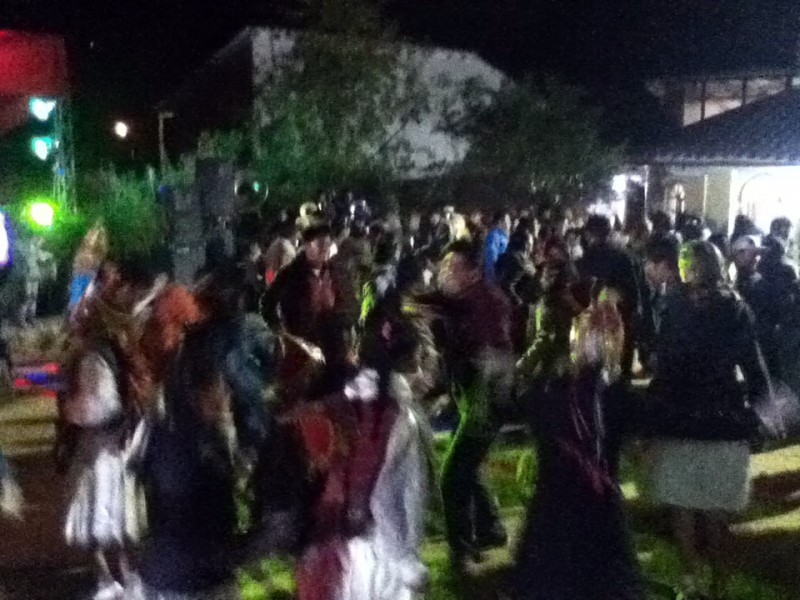 Everyone dancing as the celebration continued into the evening.