Home Page › Dyeing › On The Cloth Road in Peru: The Sallac Community

On The Cloth Road in Peru: The Sallac Community 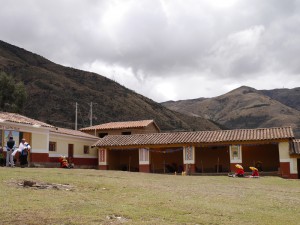 View from the Sallac weaving center.

To reach the village of Sallac, we drove on an inconspicuous dirt road outside the town of Urcos–the road climbing ever higher into the mountains. With a population of about 550 people, this simple town, in the province of Quispicanchi south of Cusco and above the Ausangate valley,  is surrounded by the beauty of the Peruvian Highlands.

Two Unique Textile Techniques
The Sallac community has two traditional weaving styles quite unlike the other CTTC weaving communities. One is a technique called watay (which means “to tie” in Quechua) where designs are made by tying groups of warp threads with a resist, dyeing them, and removing the resist. At one point, this technique was no longer practiced and was almost lost entirely for future generations. Another unique technique is embroidery. First, the textile is woven and then the weavers embroider patterns onto it. Today the community of Sallac has reclaimed these unique skills and the results are very impressive.

Sallac watay was almost lost but is now abundantly used and well done.

Watay and embroidery used together in a poncho.

Sallac weavers first weave their cloth and then embroider designs.

Meet Rigoberto
Rigoberto, the president of the Sallac weaving community, and I have had the opportunity to work together on planning a number of new weavings. He is very savvy and was excited to try these new ideas. When he brought me the first samples, I knew by his smile that he was very proud. When he pulled them out of his bag, everyone in the CTTC office was excited to see them. Nilda complimented us saying we had pushed the weavers abilities yet stayed with tradition. What an honor to work with these amazing weavers! 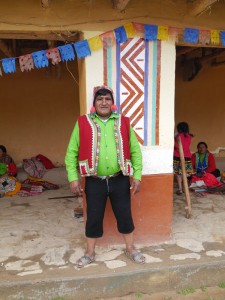 Rigoberto, the president of the Sallac weaving community.

On Official Tinkuy Dance Business
My official business in Sallac was for the upcoming Tinkuy de Tejedores 2013–the international gathering of weavers.  I was to check  on a dance that they have been preparing, to make sure that they were practicing and to also record their progress. Earlier in the week,  I had visited another community who was behind in their preparation, so my expectation for Sallac wasn’t too high. When we arrived, the dancers and musicians were getting ready and Rigoberto was rounding up the rest of the weavers in two lines to create a dance area. They did one practice run through before I recorded it. Once started, Rigoberto made sure the dancers were evenly spaced and that the other weavers participated as well. His leadership and enthusiastic energy really shines through.

Sallac musicians waiting for the cue. Check out their vests–handknitted and lined. I’m coveting one.

After the dance, he gathered the performers together for a group shot. Then, with complete hospitality, the community shared their lunch and tea with us. With Tinkuy beginning Nov 12, everyone associated with CTTC is working hard to prepare for this event. Assuredly, the Sallac community is ready with their traditional dance and costume–and textiles!

Lined up on the grass, the weavers spin while waiting for the dancing to begin. I needed a Sallac hat too as the sun is intense.

Mother and daughter weaving side by side.

The ClothRoads shop has a great selection of Sallac textiles.