Home Page › Mexico › The People of the Loom, an Amuzgo Village in Guerrero, Mexico

The People of the Loom, an Amuzgo Village in Guerrero, Mexico

Talk about a long-awaited day—we were about to see the finest backstrap-loom-woven brocade textiles produced in Mexico. We were also nearing the end of our fiber tour of coastal Oaxaca, traveling a tad into Guerrero and into the region where the Amuzgo people live, to the town of Xochistlahuaca, which translates “People of the Loom”.

La Flor de Xochistlahuaca
It’s a lovely Sunday in early February. The women of the weaving cooperative, La Flor de Xochistlahuaca, don’t usually meet on Sundays, but today special arrangements were made. They met us at their community house, a large adobe-style building with a small tienda in front and a large open space in back where they spin and weave. (Today they had also strung up clotheslines loaded with huiples of all varieties.) Once entering, we dispersed quickly, anxious to see what they wove, and part with our cash.

The natural-colored huipiles are brocade woven with handspun green and brown cotton.

This cooperative was founded in 1969 by Florentina Lopez de Jesus, a great master of Mexican folk art. Of its current seventeen members, a few have been weaving together since its inception; others recently joined. All of them weave but only six spin– a few recently joined just to learn spinning.

We learned a bit of history about their organic cotton cultivation too. Twenty-five years ago, five green cotton seeds were carried to Xochistlauhuaca with a Guatemalan friend via Mexico City and on to the coop. Since then, green cotton has been cultivated along with the brown coyuche. Upon hearing this story, one of the women commented, “I’ve been part of this group for a long time, but I’m not sure why I haven’t learned to grow cotton yet.” Everyone chuckled as it seemed she may be one of the few, or not.

Their weavings incorporate traditional brocade work, some made with handspun cotton, others with commercial cotton. The patterns vary as do the colorings used. While most of what is woven is the traditional huipil blouse, some new products of bags, pillows, and other housewares are under development.

Traditional short huipiles line the wall of the store.

This woman had recently joined the coop. She knew wanted to learn spinning. 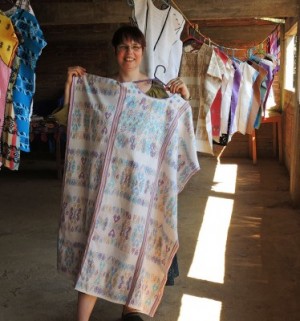 Anita Osterhaug holds up a traditional Amuzgo brocaded long huipil. (This one came home with her.)

In Community
Rounding us up after our purchases,  Eric Mindling, our guide and good friend to this community, asked us to sit with the women and tell them what we bought and why. He explained that it was important  for the improvement of their products made for the tourists and export market. It also gave them time to ask us questions.

Since huipiles are their traditional dress, we are often asked why we don’t stock them in the ClothRoads online store. The answer is pretty easy—they require such a personal fit. Everyone is attracted to different patterns and designs. Our body shapes vary widely. For example—I had snatched up an exquisite handspun brown cotton long huipil right after arriving, carrying it with me so no one else could grab it (I know who I’m traveling with.) My friend, Pat, had already told me she owned a number of Amuzgo huipiles and she wasn’t going to buy another. Well, when it came time to trying on this lovely garment, who looked great in it? Not me. Pat added it to her wardrobe.

It just so happened that I was wearing one of the Ixbalem Ke’s short white-on-white huipiles (see last week’s blog). The Amuzgo weavers make white-on-white gauze work too, just not the same way as the Guatemalan weavers do. One of the women approached me and studied the weaving. Now I’m wondering whether she may alter some of her gauze weaving based on the Guatemalan’s?

Carrying on the Weaving Tradition
We had been looking forward to meeting the founder and head of the coop, Florentina. It was explained that she was not feeling well and was taken to the hospital, only to learn later that she had passed away that night. Of course, we questioned Eric about what would become of this group without Florentina? He felt that her niece, Margarita, would be a strong leader and could carry this group into the future.

We certainly hope so as their work is indeed the finest Amuzgo weaving we had seen. We hope you agree. 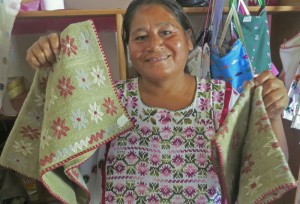 Help us carry on these traditions too. Share this on. Become a FB friend of  La Flor de Xochistlahuaca. Travel along with Eric Mindling, Traditions Mexico, on one of his next textile adventures. You’ll be glad you did.