Being on a textile adventure in one of the most desirable weaving spots of the world, there’s simply no time to waste in seeking out handwoven, artisan-made silk scarves and other accessories. I didn’t have far to go from the hotel either, just wandered a bit until I saw the sign, a simple but elegant one, inscribed with Lao Textiles, Carol Cassidy. 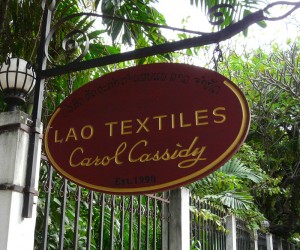 Behind the entrance gate sat a refurbished French colonial mansion, three blocks from the Mekong River in downtown Vientiane, the capital of Laos, and home to one of the first commercial weaving workshops. 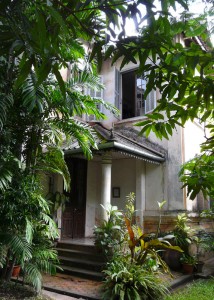 About Carol Cassidy and Lao Textiles

Laos Textiles is owned and operated by American-born Carol Cassidy. In this beauty of a building and property is her workshop, studio, and gallery. Working here is about fifty staff doing the spinning, dyeing, weaving and finishing of the all-silk, contemporary woven art for which she specializes.

Carol has been weaving since she was seventeen years old, having trained in Finland and Sweden. She’s worked as a textile expert in almost every continent from America to Africa, and arrived in Laos in 1989. Just a year later, Lao Textiles opened in the present location. The former living and dining areas were converted into showrooms with beautifully appointed, finely woven panels, pillows, runners, and more—many decorated with stylized animist motifs. I soon learned that animal and mythical-creature motifs are frequently used in Cassidy’s designs–a particular favorite being the Naga, the river serpent, a mythological water serpent with unparalleled benevolent powers.

An Inspired Story of Silken Stripes

Perhaps the Naga’s benevolence was at work as I was quickly enticed by each silken piece. Then, out of the corner of my eye, I saw vivid colors with patterns that were a far cry from Lao symbolism. Tucked away in an alcove room were stacks of striped silk scarves. At first glance, it appeared they were repetitious in coloring and sequencing, but I was wrong. Most of the scarves were unique in their striping pattern—some had narrow banding against a solid background, others were wider striped throughout containing twenty to thirty colors. Each one was a jewel in itself. 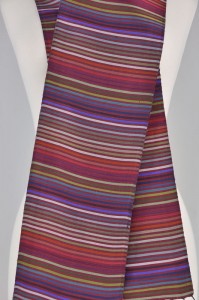 Carol peaked into the room and saw my pile starting to form. Her story unraveled about her visit to Cambodia in 1998, and meeting women who were land mine survivors, disabled, or had lost their husbands from the exploding land mines. They all needed a livelihood. So what seemed a natural outgrowth of Lao Textiles was to establish a weaving center in  Preah Vihear– she now employs over fifty spinners, dyers, weavers and finishers. This project contributes to sustainable income for the artisans. It’s  generated income for the community to build homes, add clean water, and for children to go through school.

If you want to know more about Carol Cassidy and Lao Textiles, click here.