There are scarves and then there are scarves  My pick for the “scarf of the month” almost wrapped itself around my neck and grabbed me—it’s woven on a backstrap loom in Guatemala. Trust me, this is not a bright, colorful grabber you’re familiar with, but it is traditional all the same. It’s subtle–white-on-white brocade (also called inlay) or, in this case, naturally-dyed indigo on white cotton. 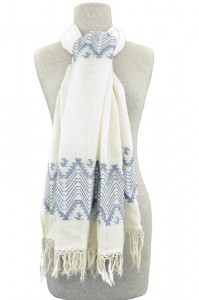 Tucked away in the cloud-forest area northeast of Guatemala City, is the community of Samac de Cobán in Alta Verapaz. Here, the Ixbalam Ke cooperative formed with about fifty women dedicated to the production of traditional textiles and preservation of traditional weaving. The sale of their weavings is their family’s primary income for their basic home, food, and education for their children.

When I first met, Amalia Gue, the leader of the cooperative, I couldn’t take my eyes off the intricate brocade weaving. This short, Mayan woman is as mesmerizing as the cloth. 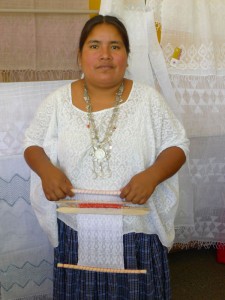 The cloth, hand woven on a backstrap loom using fine cotton, has a ground of plain weave. The decorative pattern motifs are formed by an inlay brocading technique called picb’il. The brocade is discontinuous, meaning the motifs are placed, by hand, only in certain areas and lay on top of the plain weave. 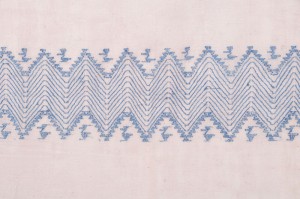 Each motif is formed using thread three times the weight of the ground cotton, this is what makes the pattern more pronounced. This zigzag pattern repeats five times through the length of the scarf.

The beauty of this scarf, besides the intricate pattern, is how soft this fabric became after washing. Before washing, it had a stiff hand, but after tossing it in the washing machine (warm wash, warm rinse, mild detergent) and in the dryer, the hand and drape of the fabric became cuddly.

When Amalia was queried about the inspiration for the patterns, she explained that these textiles have a lot of memory woven in, that the white-on-white patterning is traditional for use in ceremonies, such as weddings. And the inspiration for the motifs is all around them in their natural surroundings–corn plant, crabs, leaves, mountains, rivers, spiders, and trees, as well as ducks and people. 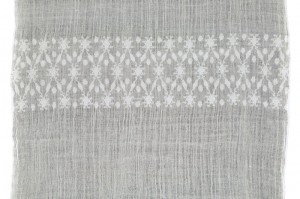 A sample of white-on-white brocade pattern.

Many things in Guatemala are not fast (or easy), and textiles woven on a backstrap loom fall into this category. While the women have access to the main white cotton thread, the ones used for the non-white brocade patterning are naturally dyed. However, the Ixbalam Ke weavers aren’t trained in naturally dyeing cotton. So the indigo blue in this scarf is dyed by another cooperative group in the village Rabinal. These women earn income from selling naturally-dyed thread to other groups and individuals.

The Samac de Cobán community also grows organic brown cotton known as coyuche. The coyuche growing had been rapidly disappearing but now production has increased and is used in their weaving. The same scarves are woven with the brown cotton as the base warp and weft and other naturally-dyed threads form the brocade patterns.

The women weave these patterns into scarves and shawls, and also into exquisite huiples. Can’t you imagine them as curtains with the light shining through highlighting the little birds, people, or zigzag patterns? 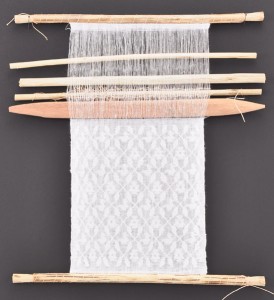 A flower and duck motif woven on a sampler backstrap loom.