Last year, ikat was the big trend in fabric. This year, it’s shibori. The fashion world has adopted the name shibori to apply to any number of shaped-resist patterns. But shibori is a Japanese word encompassing various types of shaped resists created through the manipulation of fabric. Many textile-producing cultures have their own name for tie-and-dye, such as adire in Africa, bandhani in India, and plangi in Indonesia. You may be most familiar with the term “tie-and-dye” or just “tie dye”. 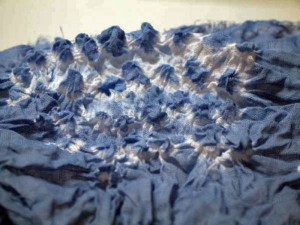 Fabric after dyeing with resist removed.

To make a shaped-resist pattern, part of a fabric has to be bound, clamped, folded, pleated, stitched, twisted, or wrapped before dyeing; the dye penetrates the non-resisted areas only. After dyeing, and once the fabric is released from its bindings, a positive and negative design shows.

Tie-and-dye can be a simple, single-dye process, or a multi-step one whereby creating a design using multiple-shaped resists and multiple dye applications. But for this blog, I’m going to keep it simple and introduce two types of resists, with one color dyeing.

Circles: To make a circle pattern, such as ones seen in this bag from El Salvador, pick up the (cotton) fabric at a certain point and make a tip like a closed umbrella. Tie the binding thread below this tip, leaving a small distance for a small circle, and a deeper distance for a large circle. Bind each circle separately, crisscrossing the thread if you want distinct lines to appear in the cloth. Tie off each area before moving on to the next. It’s then ready for dyeing.

Circles are formed by pinching and wrapping tightly toward the pinch.

Spot: A small round or diamond-shaped spot requires more precision and a finer cloth than a large circle. Consider this vintage silk scarf pattern from Japan. Each of these spots was formed by a planned repeating wrapping pattern, the spots each tied and linked from one to the next.

Small spots or diamonds are created by joining wrapping from one to the next.

Diamond-Shaped Spot: To create this larger diamond-shaped pattern in this traditional shibori cotton remnant requires more control. First fold the fabric into four thicknesses, the center of the diamond is at the tip of the double fold (a). Make a binding just below this dot. And then securely wrap around and around.

Diamond-shaped shibori formed by folding than wrapping before dyeing in indigo.

A large diamond requires the fabric to be folded before binding.

Sewn Resist
If you look closely at this indigo-dyed spiral fabric, you can still see the stitch marks left by the thread. A spiral has been drawn on the fabric using a removable marker or stencil. Using a strong sewing thread and beginning at the center of the spiral, stitch along the lines of the spiral until the outer edge has been reached. Draw the stitching thread in from the beginning or end of the spiral (or both), tightening it up until the cloth gathers. Fasten off the ends. Take another thread, secure it, and wrap it tightly around the spiral. Fasten off. It’s then ready for dyeing.

The illustrations are from the out-of-print and much used 1963 book Tie And Dye As a Present Day Craft by Anne Maile.