The Making of African Kuba and Shoowa Raffia Cloth

Reach out and touch. Isn’t that what we fiber folks do? We see something and our hands immediately reach out for the feel. That’s how I met artisan Emmanuel Kasongo. Well, okay–I met his handwoven raffia cloth first. Let me explain. I was drawn into his show booth by the kuba and shoowa cloth backdrop, the uniquely constructed handbags using this cloth along with conch shells and wooden beads as handles, and the assorted simpler raffia-style bags spilling on the floor. Then, out stepped Emmanuel, a tall, dark-skinned man with an engaging smile, wearing a mix of traditional-styled garb cut of raffia and other cloth. And then he touched me by his passion when talking about his current journey: “I have traveled the world and now I can assist the people in the villages around Molokai [in the D.R. Congo of Africa], where I was born, to help them in creating a sustainable future.” 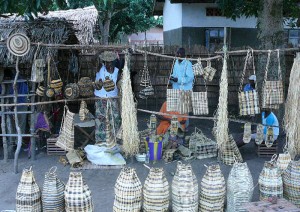 The artisans from the African Molokai village weave traditional raffia fabric and make an array of bags.

From the Congo to Paris
When Emmanuel was four years old, his family left the Congo and moved to Paris. His schooling eventually brought him into the fashion world, assisting top designers such as Jean Paul Gaultier and Francois Girbaud. But after a decade of this work, his hands were itching to make things, his own things. And so, in 2000, he began designing clothing, handbags, and jewelry.  His contemporary handbag designs use raffia cloth, both old fragments and new, and are carried by ABC Carpet in New York.

Traveling back to his native land is no easy adventure. The roads and political climate make it hard to get in and out making it expensive to ship products. So Emmanuel doesn’t go there often, maybe once a year. But when he does, he spends his time helping the artisans with designs, which is where his creativity shines.

A typical house and dense vegetation in Molokai, D.R. Congo in Africa.

Moving goods in the D.R. Congo is an arduous and expensive journey.

Making the Raffia Fabric
The twelve small villages around Molokai are all connected by bush and raffia palm. It’s the palm fiber that is used for making the raffia fabric, a process which involves both men and women. Women do the planting. Men strip the leaves of the plants which are then dried in the sun. Next, the men beat the fiber and further strip it into sections. Then they lightly spin it by rolling it across their thighs into a thread ready for weaving. But once the fabric comes off the loom, the women take over. The handwork of sewing the woven raffia into bags, clothing, fabric or embroidering designs onto the cloth is women’s work.

The size of each raffia panel is restricted by the length of the single fiber, usually about a yard square. This sturdy fabric is all used, from baskets for carrying just about anything, to the clothes on their backs, nothing goes to waste.

Kuba and Shoowa Cloth
In an area about 500-600 kilometers away from Molokai, but sharing the same river, the villagers create a different style of raffia cloth we call Kuba and Shoowa. (Kuba actually refers to the region of the D.R. Congo, formerly Zaire, where the raffia cloth stems from, and Shoowa is a tribal group who lives in this region and makes a specific style of cloth). Their designs are intricate, in bold earthy colors, and have had a variety of uses as a type of currency, as dowries, status symbols, and funerary shrouds. 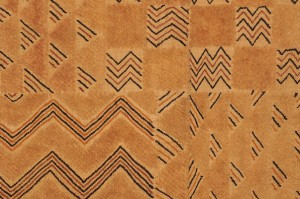 The Shoowa are known for their cut-pile velvet and embroidery cloth using raffia.

The Kuba and Shoowa cloths are pieced and embellished in various ways—appliquéd, cut-pile embroidered, patchworked, and/or resist-dyed. The Shoowa are masters of the cut-pile embroidery technique. It consists of passing threads between the warp and weft threads with a needle, without any visible stitches or knots. The threads are then trimmed, leaving a short cut velvet pile. 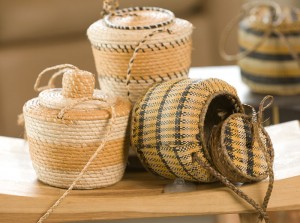 Raffia is used in making coiled baskets (on the left) and woven ones (on the right).

Thanks to Emmanuel Kasongo for providing images of Molokai village for this blog.