Today is the last post focused on the Tinkuy de Tejedores (The Gathering of Weavers), which took place just three weeks ago in Cusco, Peru. The event had so much richness—the garb worn by all the visiting weavers (except for us Americans who mostly wore drab clothing but accessorized with colorful scarves), two weaving demonstrations per day for three days totaling forty-five or so different weaving techniques, plus panels, workshops, and lectures. And if all that wasn’t enough, the stimulation of being with our “tribe” for this time period felt like three weeks not three days.

Pitumarca Weavers
The community of Pitumarca has three unique weaving styles: tapestry (tapiz), discontinuous warp (ticlla or scaffold weaving), and a supplementary technique using multicolored floral and diamond patterns. This community has woven many of our ClothRoads exclusive handspinning bags (also perfect as a knitting bag). 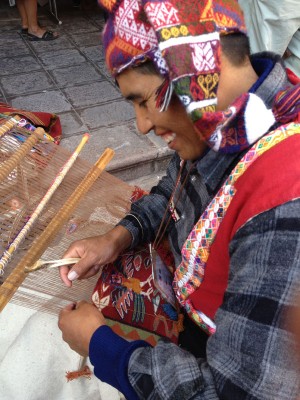 A weaver from Pitumarca, Peru, demonstrates the unique style of tapiz (tapestry) weaving.

In the 1980s, the men in Pitumarca resumed weaving an ancient tapestry technique practiced by many cultures in Peru dating back to pre-Incan times. This style of tapestry includes motifs of animals, birds, plants, and other symbols important to the narrative of the piece.

Ticlla mystified me until I took a one-day class with a weaver from Pitumarca a few years back. While I took away an understanding of the construction, what I really gained was a profound appreciation for this technique that has been used by the pre-Incan cultures of Chimu, Paracas, and Nazca. Weavers in Pitumarca and Q’eros still practice this woven form.

Last February, during the opening week of the exhibit “Weaving Lives: Transforming Textile Traditions in the Peruvian Highlands” at Colorado State University, the Pitumarca weaver Antonia Rojo Arapa demonstrated discontinuous weaving. What a pleasure it was to see her again and to meet her daughter Yanet and her mother Asunta.

Demonstrations and Classes
I signed up for the sling braiding class. The young man did his best to teach me a simple braiding technique but to little avail. I blame it on the altitude–my brain not able to process what the left hand should be clenching while the right one flipped yarn to and fro. So instead, I watched the expert Peruvian Señor Caylloma making his special dance slings. His slings are still made from llama fiber, just as the ancient Andean ones were made during Incan times. Besides ceremonial or dance slings, simple ones are used to control animals as well as to secure their bundles onto the backs of llamas.

First time ever to leave Indian soil, weaver Dayalal Kudecha from Bhuj, entranced many weavers and non-ones alike with his loom, designs, and woven shawls. So unlike anything they had seen before.

Tisco Caylloma (on right), from Arequipa, Peru, is an expert sling braider.

I’m pretty sure that some artisans stretched their traditional dress perhaps a bit far from mainstream. No matter—they were magnificent.

Color abounded as did stretching one’s creativity. The Peruvian weavers took workshops too. They attended sessions on marketing strategies, product development and design. American Mimi Robinson had 200 weavers stretching their color world into designing new striping palettes. Once they had yarn in their hands and started wrapping, they didn’t want to stop.

The weavers from Centro Mallki-Moquegua, in the southern highlands of Peru, wore the most colorfully-ornamented dress.

An artisan from Huancavelica takes photos of the communities’ colored-stripe wrappings.

A weaver from Chaullacocha, Peru, demonstrates her traditional-style pictorial weaving on a backstrap loom. Note the beaded hat band.

Two men from Santo Tomas in the Peruvian Highlands dressed in their traditional garb.

The men from Huacatinco, Peru, adorn their knitted hats and collars with beaded designs.

Many weavers I’ve spoken with back in the U.S. have said how much they wanted to attend this year and are planning to go to the next one. And my reply has been, “I don’t think there will be another one.” But we learned that Mexico is going to pick up the baton (or in weaving lingo “batten”) and host the next Tinkuy in 2015. Just a few years before the weavers of the world will be back together again.