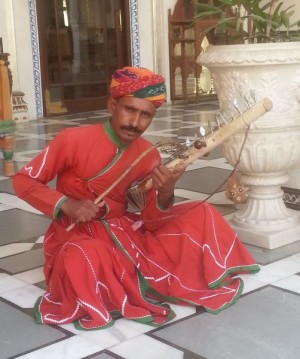 What is a resist-dyed (tie-and-dye) cloth that can be used for bedding, a pillow, holding water, tying up just about anything, but primarily worn on the head by men? If I gave you another clue, that it’s wedding and festival time in Rajasthan, India, would that help? Yes, it’s a turban, known as pagri, worn not only in the Rajasthan, the Land of Kings, but also in other regions of India, in Bangladesh, and Pakistan.  Not all turbans are made from the brightly colored, resist-dyed cloth; many are solid colored. But all are identifiers for caste, profession, religion, and region.

There’s nothing like a complete immersion into a country of about 1.25 billion people then, after flying twenty hours and on a train another seven, to attend the Pushkar Fair, the oldest and largest camel fair in the world. Once a year, at the time of the full moon in November, this Rajasthan town explodes with hundreds of thousands of pilgrims and tourists, along with assorted camels, cows, horses, and water buffalos. What a great place to people watch as well as be amused by such competitions as camel decorating and dancing, moustache, and turban tying. Turban memories from the Pushkar Camel Festival.

In Rajasthan, the turbans are brightly colored with many of the colors spot dyed by hand or dip dyed, rather than by being fully submerged in a dye bath. That’s how these were created. The thin, undyed cotton cloth is folded into four or more layers before the tying begins. (My bandhani blog shows the process without the spot dyeing).

Historically, in the 19th and early 20th centuries, the Marwari merchants of Rajasthan wore elaborately tied, brightly-colored striped turbans. These turbans were made by the leheria technique–the pattern imitates the leher (the Hindi word for wave), a symbol of rain and bountiful harvest. This process continues to be practiced in the Rajasthan towns of Jodphur, Jaipur, Udaipur and Nathadwara.

The leheria technique is a different resist-method than bandhani–the material is rolled up and tied tightly at intervals, then dyed, so the sections that have been tied remain undyed and the untied portions take on the dye color. These fabrics are rolled diagonally from one corner to the opposite selvedge and then tied according to pattern. Leheria is tied wet, with the fabric looped around a short, vertical wooden pole. (This technique is similar to the Japanese arashi shibori.)

In Jaipur along the Old Amer Road is the Surabhi Turban Museum. Upon entering there is a wall placard explaining that in Rajasthan, the color of the turban changes every month, that summer colors are lighter and the winter, warmer. The wall is lined with glass cases filled with turbans from solid-colored to highly ornamental, all depicting the use of turbans in Rajasthani culture.

A Most Auspicious Time

We were staying in Jaipur at a most auspicious time. In the one night alone, there were thousands of wedding celebrations taking place. The streets were crushing with cars, cows, people, and scooters, along with wedding processions led by musicians and ending with the groom riding atop a highly-adorned elephant.

Our plans to stop at a turban store on the way to dinner were thwarted by the traffic snarl. Lamenting this to our most gracious hostess over dinner, she sent one of her staff down the street, and before dessert we had a pick of some new turban fabrics (textile lovers consider this dessert!).