Home Page › India › We Have Gold in Our Hands

We Have Gold in Our Hands

“We have gold in our hands and we did not even know it.” –Aasif Ansari, weaver

Traveling through the northwest region of India and meeting one artisan after another was beyond exhilarating–it fed our textile-loving souls every second. Each encounter was deeply rich with learning and the warmth of the artisans’ welcome. By the end of the day, we were satiated and spent, numbed by the cacophony of sounds, pungent smells, and saturated colors which assaulted us at every turn, but ready to welcome it all again upon rising. 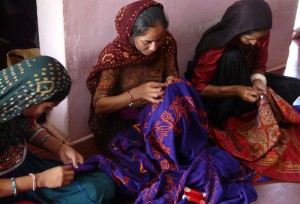 Visit with the Ahir women (young and old) in Kutch who stitch fine and colorful embroidery.

We met ninth-generation families still engaged in their craft, as well as visiting decades-old associations where women, young and old, came together to design or stitch. I don’t know the statistics of how many textile artisans are at work in India, or the decline in that number due to the opportunities presented by the global economy. We certainly heard from many a guide or artisan that the interest in keeping these traditions alive is becoming harder. Or that, while the young people continue to dye, stitch, spin, or weave, they talk about other opportunities ahead. 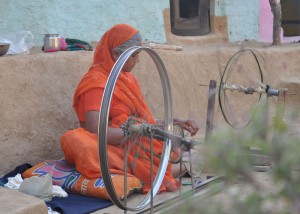 After khadi cotton is spun, the recycled bicycle wheel is used to wind bobbins in preparation for weaving.

There are those who can see the changes and know that this handcraft wealth cannot leave the country; that there are ways to ensure its future. One such person is Sally Holkar.

Sally began her relationship with handloom weaving when she married into the Holkar family of Indore, India in 1966. For over forty years, she has lived in Maheshwar, a traditional weaving town whose largest source of income is weaving. When she first came here, there was little contact with the world outside of town–certainly no cars, cell phones, or computers. But now, young weavers want to be part of the larger world of fashion, film, and technology but there are few opportunities to match these new expectations.

WomenWeave
In 2002, Sally founded WomenWeave, a registered Charitable Trust, to continue work started by the Rehwa Society which she had formerly managed. WomenWeave supports the role of women in handloom weaving and works towards making handloom a profitable, fulfilling, sustainable and dignified income-earning activity. 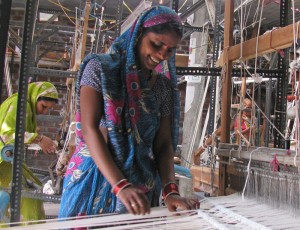 She states, “I wonder about the future of Maheshwar, of handloom, of these kids I have known since they were born. Will they weave? Do they have a choice? What would progress mean to them? Should they study? Or should they count on their skills of their deft fingers to weave themselves to fame and fortune? One thing is clear to me: handloom will not continue beyond this generation unless it becomes an aspirational profession. And what would that mean to today’s weavers? A bigger house? More education? More income? Does the answer include cloth that is woven by their hands? I think it could if we can find a way to engage their minds and their spirits and free them from their perpetual cycle of debt. This means introducing them to a wider world that needs and esteems them.”

Welcome the Handloom School
WomenWeave is in the midst of developing a vocational Handloom School to provide weavers a creative, practical and multi-disciplinary learning experience thereby enabling them to ethically and equitably engage in the global marketplace.

Until now, young weavers had no opportunity to advance their business, design, or technical skills and certainly no institution that addressed their traditional qualifications, which are intuitive rather than academic.

The long-range vision of the school is to support and sustain weavers through relevant skill enhancement and to function as a repository for the acquisition and generation of handloom weaving knowledge. Ultimately the aim is to reposition handloom in the minds of weavers, the marketplace and the world so that it becomes commonly understood, desired and supported. 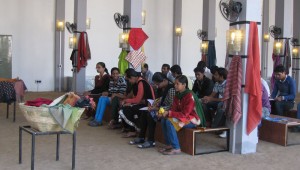 Design class at the Handloom School.

And the aim is starting to take hold. Witness a young weaver, Aasif Ansari, from the traditional weaving family of Maheshwar. When the WomenWeave project first interacted with him about his future plan, he said very clearly that he didn’t see any future nor interest in the handloom, but he also didn’t know what to do with his life (he was 19 years old.) After joining the program, where he learned computer skills, design, entrepreneurship, and English, he realized that he found the “Gold in our hands and we did not even know it.”

Thank you to WomenWeave  for providing the images and information on the Handloom School.