Home Page › Embroidery › Weaving On the Edge in the Peruvian Highlands

Weaving On the Edge in the Peruvian Highlands

Breathless. That’s what I was after dancing at 13,000 feet in the highland weaving village of Sallac, Peru. How could I refuse the outstretched, gnarled hand of an elder, who smiled and gestured that I too should join in the festivities. Last week was the Sallac community’s 8th anniversary of being a member of the Center for Traditional Textiles of Cusco.  I attended last year’s festivities but I suspect this year’s celebration was similar—blaring music from a speaker that bonked on and off, villagers dressed in their traditional best, behind-the-scenes preparation of carne, corn, and potatoes for the evening feast, huddling groups of young people planning their dances, and families staking out spots for their family gathering. 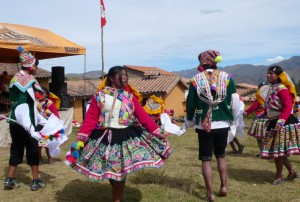 The young people in the weaving community of Sallac, Peru dance during the festival.

My companions and I arrived right before announcements commenced; I sat on the grassy field behind the weavers so I could gaze unobtrusively at the women’s skirts (polleras). The pollera is not only a basic article of clothing but it’s where a woman shows off her cleverness and handwork ability. All skirts are very full and gathered, often worn one on top of another. The edges are embellished with woven, multicolored bands (golones). 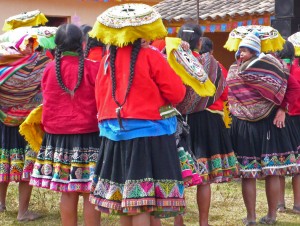 Note the difference in the skirts–the amount of colorful embroidery and the skirts’ twill tapestry-weave edging (golones).

But back to the party. Announcements and singing started mid-day. Then the dancing competitions began and the young women began twirling their skirts. Here’s a video clip (length 2:31) of three different competitions representing aspects of their lives, from weaving to planting and harvesting. Look how the skirts are highly embroidered, how the border designs of the golones vary from one to the next. And best of all, see the layering of the skirts as the young women twirl to the music?

In Sallac, the woman’s costume has become very elaborate over the last years. The young women have very colorful patterned skirts where the older ones are mostly black with a patterned border. 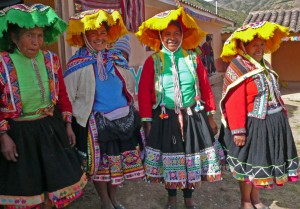 The elders tend to have simpler skirts borders while the younger women’s have become more colorful.

The word golones refers to its making: golon, a twill tapestry weave. The band is woven on a narrow belt loom, the brightly-colored geometric patterns created by using multiple heddles for raising the warp threads in twill weave. The weft packs down over the warp as the geometric patterns are made in tapestry style, thus making a very sturdy and durable band. 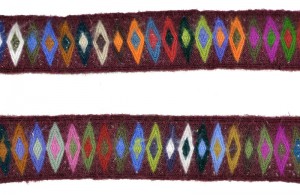 Thus, weaving the golones is a very time-consuming process, with an average skirt using 6 yards for the bottom edge. So when the pollera gets old, the bands are removed and applied to a new skirt. 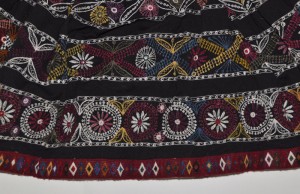 The bottom edging of this Chinchero skirt shows both embroidery and the twill tapestry-weave band (golones) at the border.