What is Ikat Central Asian Style? 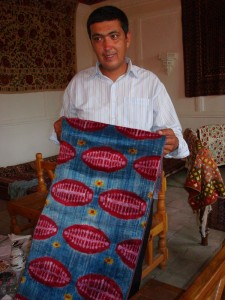 There are many theories about how ikat came to Central Asia. Some claim the technique existed as far back as the 10th and 11th century but most sources attribute it to the 18thc. The largest center of manufacturing silk ikat was, and still is, in the Fergana Valley (Margilan) in Uzbekistan. In the early 20th c. Margilan had 120 workshops with a division of labor split by technique–some of the workshops processed the raw yarn, some engaged in dyeing, and others did the weaving. This system is still being followed today although the existence of workshops is less due to the suppression of this tradition during the Soviet era. But yet, Margilan still has the reputation for the best quality materials.

Central Asian ikats are characteristically large bold designs. Bright primary colors such as red, yellow and blue (and their variations) are made from natural colorants. Some of the typical motifs are pomegranates, tulips, trees, ram’s horns, birds, scorpions, and spiders. As the weaving has become more commercial, the designs have been simplified. 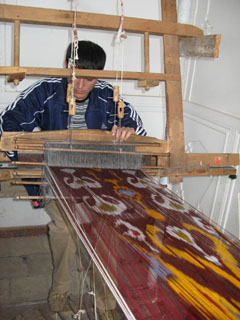 Bold Design Being Woven on Loom

Traditionally these textiles were used for male and female robes, linings, wall hangings and coverlets. They were considered a luxury to be used for very special occasions and gifts. They are currently being used by fashion and interior designers.

In order to fully appreciate the beauty of ikat, it helps to understand the process of creating this wondrous cloth:

Silk is measured for the warp (170 meters) and stretched on a frame.

The Master Designer marks the pattern on the silk warp threads.

Apprentices proceed with tightly tying a strong cord (or plastic) around the warp threads following the design. This wrapping acts as a resist so the dye cannot penetrate the silk fiber. 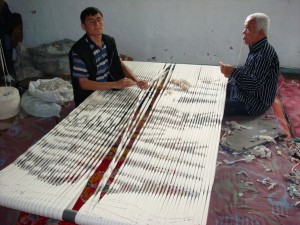 The warp is then removed from the frame and dyed the first color with the lightest color being first. The untied places are dyed and the tied threads remain white.

Then some of the white threads are untied, again according to pattern, and the previously dyed areas are tied. The warp is then dyed a second color. This process is repeated until all of the colors in the design are finished. Usually seven is the maximum colors in a design but this tends to be rare now. 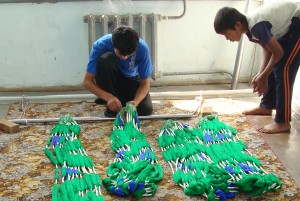 Once all the silk is dry, the resist material is unwrapped revealing the full warp pattern.

The warp is then threaded on the loom under the supervision of the Master Designer (always a man). It is then woven with a plain cotton weft, Adras, in a rep-weave or a silk weft, Shohi, in a satin-weave. The pattern is in the warp threads only and the bold, almost painterly, woven design is achieved by the warp threads being very densely sett and the weft threads barely visible. The weaving itself is mostly done by women. 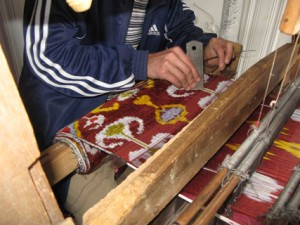 If this is to be a silk velvet ikat, the process is slightly different and will be discussed in an upcoming blog.

Thanks to Judi Arndt for providing this information and images. Judi is an avid textile collector and fiber artist. She has traveled to Uzbekistan many times and met Rasuljon Mirzaahmedov on her third visit there in 2006. Being a weaver and natural dyer, Judi was extremely impressed with the velvet ikat being woven in his studio. So much so, that she has volunteered her time assisting in his booth at the Santa Fe International Folk Art Market for six years.