“While one silk thread is strong, many woven together are stronger.”

This is a fomba, or proverb, uniting the many people involved in the production of exquisite wild silk, handwoven products from the island nation of Madagascar, located off the coast of Africa. 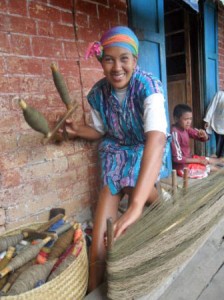 Malagasy silk weaving is one of the country’s most honored craft traditions although it decreased dramatically for some time. It’s considered a female activity, one that unites family and community members. For generations, mothers have passed down the craft of making silk shawls, called lambas, to their daughters. This weaving varies by region but are distinguished by pattern, material, color, and use.

Another Malagasy proverb gives insight into the lamba, “This is the lamba. When one is angry it is wrapped around the waist to free one’s hands to fight, when one sleeps it serves as a blanket, when one goes out it is worn as clothing, when one dies it becomes a shroud.”

Silkworms and Its Food Source 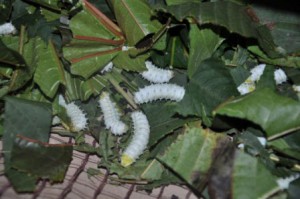 Silk production is traditional to Madagascar but, for many reasons, it had decreased significantly. The Tapia trees, the main source of food for the wild, large, indigenous Malagasy silkworm borocera madagascarensis or “landibe”, were being ravaged by bush fires, felling, and the invasion of other species. The leaves of the Tapia are the source of food for the caterpillars and as the forests declined so too did the silkworms. However, over the last ten years, much environmental work has been done to stabilize and renew the Tapia forests.

The silkworms have stinging hairs which are shed and incorporated into the developing cocoon. After the silk is removed from the cocoon, it’s handspun either using a spindle or a simple wheel. Some of the threads are naturally dyed into an array of colors from local materials such as bark, soil, leaves, and flowers; others are kept in their natural state. The skeins are then dried on wooden stakes, 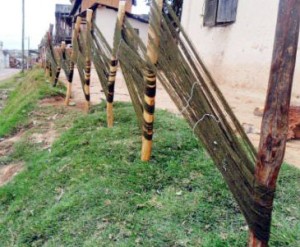 warps are wound in unique color and pattern combinations, and the women weave the cloth by hand—in some cases, on the same loom used in their family for nearly a hundred years. 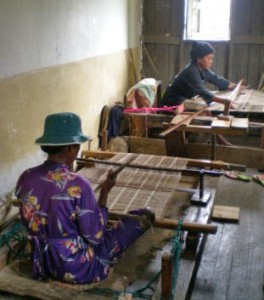 Sahalandy weaver in process of making a silk shawl on a traditional floor loom.

Thanks to many efforts, there is a growing market for silk in the regions, and collaboration with local cooperatives and NGOs means the labor can be shared–traditional silk weaving has returned. Federation Sahalandy is just one of a number of cooperatives who have joined together in the spinning and weaving of a cloth that is the tradition of the Malagasy culture. 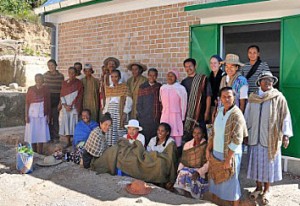 Members of the Federation SAHALANDY at their boutique for raising silk worms.

They are training women weavers on all stages of silk production; from raising the silkworms, to spinning, weaving and increasing the sales of their silk products.

Thanks to Natalie Mundy for providing images and some information for this Blog. Natalie is a Peace Corp volunteer from Roanoke, VA, who spent nine months in Sandrandahy, teaching the weavers marketing, human resources management, accounting and financing skills..

Federation Sahalandy (FS) is comprised of seven weaving cooperatives located throughout the surrounding communities of Fandriana, in the mountain area of Sahdrandahy, Madagascar. The first of these was started in 2000; the final group was organized in 2006. Representing eighty weavers in the surrounding area, FS was launched in 2006 as a response to the villagers’ desire to collaborate in achieving their goals and objectives.

The primary goal is to improve the standard of living of each individual weaver. Because a majority of the association is female, one can understand the vital importance of the role of women in the lives of the people of Sandrandahy. One of their main goals is to expand and to welcome more females into their cooperatives, and continue to empower their daughters. With a great emphasis on professionalism, fairness and equality, FS works hard for a sustainable income to support their families with safe homes and nutritional food. Above all, their aim is to be financially self-sufficient.