The mastery of making traditional, hand-knotted buttons by the Moroccan women of Khenifra has taken on new forms. Through the creative efforts of the Artisanat des Femmes cooperative, these buttons have been strikingly transformed into colorful strings of jewelry.

A finished necklace made from buttons.

Despite their tiny size, the djellaba buttons used on Morocco’s traditional long caftan, have made a significant financial impact on the lives of many women across Morocco.

The town of Khenifra is positioned strategically between two big trade cities–100 miles to Fez and 186 miles to Marrakech. This area is well-known for its handcrafts, particularly traditional Berber rug making and the button-making craft, having been introduced by early Jewish settlers long before the famous city of Fez was founded.

Making the djellaba button it is a tedious process requiring a steady hand and considerable talent. Women learn this skill while young, usually from their mothers or grandmothers. Using a simple needle, the women knot sabra into incredibly intricate buttons. One button alone can take four to ten minutes to make depending on the maker’s skill level. You can see buttons being made by the women in Sefrou, Morroco in this video.

Until recently, the Muslim women who make the traditional buttons have received minimum pay from seamstresses or middlemen who buy their buttons by the bundles. But with the help of U.S. Peace Corps volunteers, they decided to create their own products and make an innovative jewelry line that blends contemporary and traditional Moroccan design. The jewelry quickly became a hit, and has since become one of the most popular artisan crafts in Morocco.

A detail cluster of djellaba buttons strung together for jewelry.

To manage the growth of sales, the Khenifra group of women decided to become an official cooperative, the Artisanat des Femmes, in 2008. The cooperative has about fourteen official members and has stayed about the same size since it was founded with some members leaving and others joining.

While the cooperative doesn’t have a collective workshop (the women make buttons and jewelry in their homes), they do meet weekly to discuss jewelry designs, orders, and distribute payment. Several members are really good at design and will critique other’s designs during their weekly meetings.  Business decisions are done as a group, but the elected board can make decisions on behalf of the cooperative. Today, the cooperative provides a reliable income, the buttons no longer a symbol of their poverty. 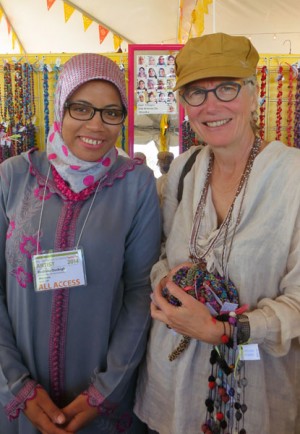 Rachida wears a traditional djellaba with hand-knotted buttons sewn on the front. (I’m on right with a bundle of the cooperative’s new jewelry.)

When you purchase this jewelry and buttons from ClothRoads, you help us build and develop new markets that allow artisans and communities, especially women and girls, to flourish. Share it on.

Thanks to Dan Driscoll and Tifawt Belaid of Anou for the information, assistance, and efforts on behalf of the women artisans.